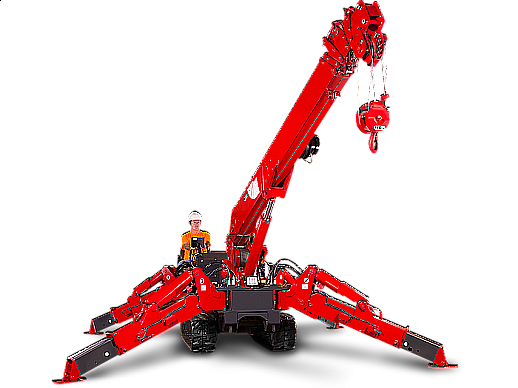 So you need a crane that can consistently lift up to and sometimes over 4 tons of materials with each load. You need that crane to be able to be moved from checkpoint to checkpoint throughout the project. Sometimes, that machine will be going over construction dirt and gravel. Other times, it will need to be able to do the job in a tight squeeze.

Diversity is also a must, so if the machine can do glass installation support and elevated work support, then that machine becomes a super-utility that you and your team can rely on for years to come.

If you didn’t know already, you just perfectly described the Spydercrane URW-546.

It’s the crane that most acts like the Swiss-Army knife of mini crawler cranes. It can handle some weight. It can do the tight squeezes, folding into a tighter 4.52 ft, which allows it to fit through double doors. And if it has to lift in a small area, the URW-546 has 360-degree turning radius capability.

Do you feel the need for (a quick, yet safe) speed on the job?

It won’t win you any races on the go-cart tracks (maybe the bumper car track, but that’s probably not advisable), but with a top speed of just under 4MPH, you won’t feel like you’re waiting forever the the crane to move.

Everything you’ve come to know and love about Spydercranes can be found in the URW-546. Rugged, durable, and versatile, the URW-546 is the mini crawler crane to fill several of your jobs.

For more information on the URW-546, contact us today.