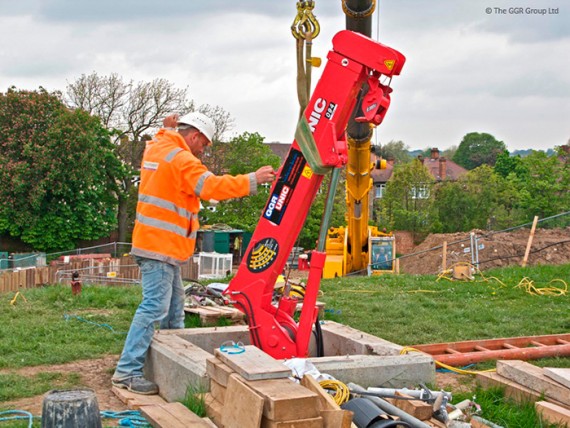 We just talked about the biggest of the bunch: the URW-1006. The Spydercrane so big that it’s needing a little time to make its grand entrance into the western hemisphere.

Now it’s time to talk about the other end of the spectrum: the smallest, lightest Spydercrane offered.

The URW-094 is the smallest of the bunch

It’s weighs in at just over a ton. It can extend nearly 5 and a half meters out. And as for it’s maximum lifting capacity? It’s officially 0.995 tons. It really is just, that, close to a ton.

Don’t let the numbers fool you. The URW-094 is a machine that can scrunch to just over a half-meter wide yet can withstand maximum wind speeds of 22 MPH. It can also work with multi-position configurable outriggers.

Because of the size and efficiency of the machine, the URW-094 has the ability to slide through a standard single-wide door. Yes. It can take service entrance into the project location.

It also has many of the same features that have become synonymous with Spydercrane. The features include the spyder support legs, remote controls, and multiple extensions to do a variety of elevated projects including different type of extensions and installations.

Being the lightest has its benefits. Because of its size and scope of project abilities, the URW-094 is typically offered in a variety of rental and maintenance contracts. To learn more about what the URW-094 can do, and how we can make it work for you, contact us today.