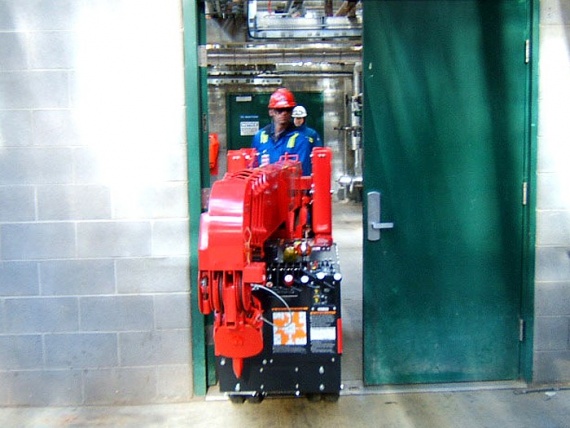 We recently had the privledge of being interviewed by Tudor Van Hampton at enr.construction.com. We gave him the keys and let him take one of our new Spider Cranes (update: "Spydercranes") out for a field test. He did more than drive it in a circle and take pictures. Here's an excerpt:

"Last week, I caught up with Steven Brooks, a salesman at Country Club Hills, Ill.-based Great Lakes Lifting, which sells, rents and leases a model called the Spydercrane, built in Japan by Furukawa Unic Corp. Mechanical trades used this machine, as well as a similar unit called the Herkules, to lift pipe, sheet metal and other supplies into the vertical hospital.

"With my video camera rolling in his company’s yard, Brooks took me on a demo of two models. We took turns at the remote control lifting a concrete highway barricade. I tried my best to tip the crane over—safely testing the limits of the machine, of course—but the ground-pressure sensors on the tentacle-like outriggers kept me locked out."

Thank you enr.construction. It's some mighty fine praise bestowed upon us..

Read the original story at ENR.com.

Ready to launch a 'Spyder Attack' on your next project?

We invite you to try our Spider Mini Crawler Cranes out on your next project. Remember, the smallest crane can fit through a single door, reach just over 28 ft and lift a little more than 3 tons. The largest in our fold still fit through a double door and reaches nearly 50 ft.

For more information about the latest mini crawler addition to the Spider Crane family contact the crane sales office at 815-931-4825 or email us at info@greatlakeslifting.com.